Last Halloween, when I was driving my son home from work, and happened to be switching radio stations, I heard the mention of a "lady in white" frequently sighted in Nob Hill, San Francisco. The name of this alleged specter was presumed to be Flora Somerton.

The story relayed over the airwaves was brief but mentioned that the young lady mysteriously disappeared from a ball one night in 1876, only to be discovered 50 years later, dead in the same dress she had been seen wearing the night she vanished. The DJ was not very clear about what had happened to Flora during those 50 years. Was she dead all that time and they only discovered her body 50 years later? Or did she die 50 years later? I was intrigued by this story, even the just the small tidbits I heard over the radio, so I decided to go home and see if there was any truth to this story or not.

First, I searched her name and every variation of it: Flora Somerton, Flora Sommerton and Flora Summerton. Besides the many links to websites mentioning the story in almost a scripted, (copied and pasted) regurgitation of the same story, there was not one website that cited any concrete sources of where they got their information. It appears that each person copied from the other person, and so on, leaving the internet inundated with sites mentioning her story, but not really detailing facts.

Several "paranormal" authors mention her story as fact in their books, claiming that she was a real person who really disappeared in 1876. They go on to state that she was engaged to be married to someone her parents set up (basically betrothed), and that at her "coming out" ball she took off and disappeared. Several writers claim that her family were socialites in San Francisco's high society and that they offered large rewards for any information leading to Flora. There are mentions of $250,000.00 being offered as a reward from her family, as well as noting that the newspapers all over the country published this mystery.  Then the story goes on that nearly 50 years later, an indigent woman going by the name "Mrs. Butler" dies in Butte, Montana, and that when her body is discovered, she is found with the dress and newspaper clippings about Flora's disappearance in 1876. Allegedly the authorities put two-and-two together, leading to the conclusion Mrs. Butler is actually Flora Somerton and she is brought back to her family plot to be buried.

The ghost story surrounding Flora claims that she haunts California Street, between Jones and Powell Streets, where she once lived. This is close to the Fairmount Hotel. She is known as the "Ghost Bride of Nob Hill" or the "Lady in White."

In theory the alleged history of this woman's story sounds interesting, but I could not find any facts to substantiate any of these claims. Although these previous writers claim there were newspaper articles laying out the entire story from her disappearance to the discovery of her body half a century later, none of these writers ever cite the sources they used to base their conclusions on.

I diligently searched every archive database I could find and came up with no newspaper articles of that time period showing that any woman named Flora Somerton had been missing, nor were there any records in Butte, Montana, showing her death, or the death of this "Mrs. Butler," in 1926.

In reality, it appears that there was no Flora Somerton (spelled any way you try)....and if there had been, she did not live in San Francisco. There are no records of birth, death, census records, voting registries, nothing with Flora's name or anything that remotely comes close to it. The only newspapers that mention her at all are ones that mention the legend, the ghost stories, not the events that supposedly took place in 1876. 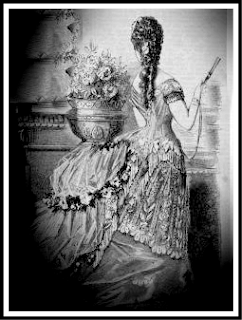 In my research I did find one family with that name, although they spelled their last name as Summerton. They also lived in San Francisco. The 1880 Census shows the father's name was George Summerton, and his wife, Matilda. George had two daughters from his first wife, Susan. Their names were Amelia and Elizabeth; however, neither one of the daughters disappeared. Another thing to note, the family did live in Nob Hill, but not on California Street. The Summerton's residence was located at 1417 Hyde Street, in between Jackson and Washington Streets, but again, these young ladies did not go missing.

I hate to rain on anyone's parade but there are no records or documented facts that prove Nob Hill's infamous "lady in white" was this woman Flora Somerton. Again, it is highly unlikely this woman "Flora" ever existed at all.  The "lady in white" stories go back centuries, leading us back into ancient folklore from Europe, such as France's "Les Dames Blanches." This tale is among the most popular in urban legend folklore that I have found in my research and writing. It appears every region has their own story of a mysterious "lady in white."

So in ending....whatever is roaming California Street in the dark of night and whatever you choose to believe it to be, one thing is for sure: it isn't Flora Somerton.