Have you ever walked around a cemetery and wondered what certain symbols or statues meant? I have been obsessed with cemeteries for quite some time and I frequent them quite often. During my times at certain cemeteries, I grew more and more fascinated with finding out the meanings for some of the beautiful and elaborate statues and stone designs on crypts and headstones.

This blog will touch on certain meanings of symbols one might find strolling along in a cemetery. I will also address more in depth meanings of statues that one may just overlook or assume is "art" for the the graves of those who have passed on.


The Woman In Mourning-

In the first photo to the right (top photo), you see a woman looking downwards as if in mourning. She is holding a palm branch and is kneeling down just a bit. There is a large pot next to her that contains a plant. Well, at the time of this person's burial, they would have planted a century plant in it. A century plant (also known as an agave plant) symbolized immortality or everlasting life. Now sometimes you will find a live plant, while others might incorporate a statue of a century plant instead. The woman in the photo stands for sorrow, grief and mourning. While the palm branches she is holding stands for victory over death. Many times the woman may also have a fern branch in her hand, which then would mean sincerity and humility. In some cemeteries the woman is portrayed as a weeping woman, even crying and praying while looking upwards towards the heavens. 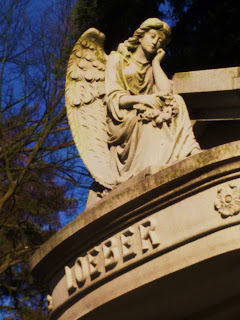 A common statue one might find in a cemetery would be one depicting an angel. Many times the angel is female with her long flowing tresses and feathered wings. In this photo to the left, this angel is shown sad, sitting atop the family crypt protecting it while holding garland.  Angels in cemeteries symbolize protectors and people also thought of them as guides to heaven. The garland stood for ones victory over death.

One of the sadder symbols were the ones representing the death of a child. When you are at a cemetery many times you wish to imagine that these people lived long, happy lives before they died at an old ripe age, but sadly that isn't so. In fact, most of the graves you will find in an old cemetery will be of someone who died before the age of 18. In fact, it was so common for children to die that many times you will find several headstones pre-dating their parents deaths surrounding a family plot.

When a child died, their headstones usually depicted the age (down to months and days) of the child and usually had some sort of symbolism, whether it be a lamb, cherub, sleeping child or even just a carving of flowers (usually Daisies) on top or within the headstone itself. A carving of Daisies on one's headstone represented innocence, hence the reason they used them on many children's graves. Another symbol of the death of a child was the carving of two small empty shoes.

The Lady (and her many symbols)-

In some historic cemeteries you will find statues of women and sometimes even men. In some cases the statues will depict the likeness of the deceased, while others use a standard statue with meaning behind it. Take this photo to your right as an example. The woman is atop an elaborate headstone. The woman has her hand raised towards the sky, with a closed fist. This symbolized strength and solidarity.

In the next photo just to the left, you will see a lady with her right hand over her heart and her left hand holding an anchor. The right hand over the heart meaning love of God and loyalty. While the anchor has two meanings, hope and eternal life. Many masons or sailors incorporated an anchor on their elaborate headstones. For masons, the anchor symbolized well-grounded hope.  Sometimes you might find a lady holding a cross, which stands for faith, while other times you might find a woman clinging to a cross which could mean that the family who buried them believed his or her "soul" was lost in sin, therefore the only hope for their "soul" was was through Christ.

Nearly every cemetery you go to you will find a masonic symbol, whether you recognize it or not. Here are just a few examples of masonic symbols:

The masonic square and compass as seen in the photo to the right is the most common of all masonic symbols one could find in a cemetery. This particular photo comes from a grave of someone who died in the mid 1800s. Pyramids and the 'All Seeing Eye' (sometimes there is a sunburst coming from it) both depicted standard masonic symbolism. Anchors meant well grounded hope, a hand holding a heart meant charity (also used by IOOF), beehives meant faith, education, human industry and domestic virtues (also used by IOOF). A double-headed eagle and even a crown with a cross all have Freemason origins as well.

Another symbol of freemasonry is that of two hands shaking. This symbolizes the departing of ones life from its earthly existence. Basically, its allowing the departed to say his farewell to the living. 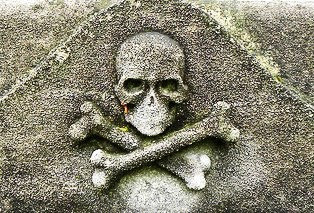 In my next blog I will touch on some more graveyard symbolism!