What Happened To Dorothy Waldrop? 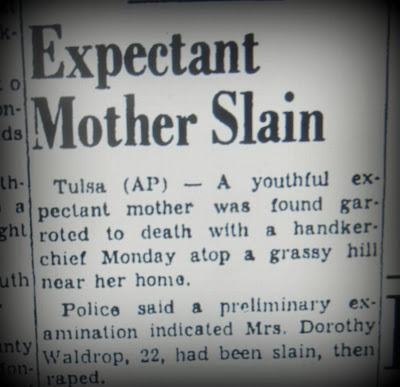 If you have read my blogs about the murders of Vesta Belle Sapenter and Anna Corbin, then you know that the main suspect in both cases was Eugene Monroe. Monroe was a troubled young man, who seemed to have issues staying out of jail. He was described by those who had been around him, as a person with a terrible temper, "tortured eyes" and a scarred face. Out of the things he was arrested  and convicted of, I am afraid to think of the many other crimes, and possibly murders he may have committed that we don't know about.

The M.O. used in both Vesta Sapenter's murder and Anna Corbin's murder, was strangulation with a hemp cord. In Vesta Sapenter's case, she was also raped and her lower garments of clothing had been ripped off of her. With Anna Corbin, although she was not raped, her lower clothing had been messed with, which leads me to believe the murderer was going to attempt to rape her but didn't have time or was worried he would get caught so he stopped.

In Anna's case, she was bludgeoned very badly, something that might happen in a severe struggle or out of anger from the assailant. In both cases, I think the victims may have been attacked from behind. Sapenter was hanging curtains in her room when she was attacked, whereas Anna Corbin was arranging flowers in her office when she was attacked. Both were strangled with hemp cords, in the exact same way. One newspaper article even mentioned the fact the very knot used to strangle both victims was placed in the exact same spot, pulled tight behind the left ear.

Although the main suspect in both crimes was never convicted, there were more than enough people who believed he was responsible for both murders. Upon his release from Preston, which his original sentence there was for burglary charges, he went to Tulsa, Oklahoma into the care of his aunt. He was later arrested again in Tulsa, on indecent exposure and later robbery charges. While in jail, Monroe was caught passing a note to another inmate claiming he was the "hottest thing in town." He had also been bragging that he was a "sought after criminal" to another cellmate, when referring to a unsolved murder** he admitted to having committed.

Who Was Dorothy Waldrop?

Dorothy Waldrop was a 22 year-old, former Dance Teacher at the Murray Dance Studio in St. Joseph, Oklahoma. She was also the pregnant wife of Robert Waldrop, a taxi cab driver in Tulsa, Oklahoma.  On the evening of Dorothy's murder, her husband said goodbye to her around 8:15 p.m. when he left for work. Upon arriving home at 1 a.m., Robert discovered the front door wide open and his wife missing. One of their neighbors was later questioned and she remembered hearing a scream around midnight, but it was quick and she didn't know what to think about it so she didn't bother to wake her husband and went back to bed.

Young boys discovered her body June 24th, 1951 on a grassy knoll just outside the apartment building where Dorothy lived with her husband. She had been strangled with a dirty handkerchief and raped post mortem. The partial lower section of the venetian blinds from the Waldrop's apartment was later found in a clump of weeds outside the apartments, near where Dorothy's body was found. According to the authorities, they found Eugene Monroe's fingerprints on the blinds. 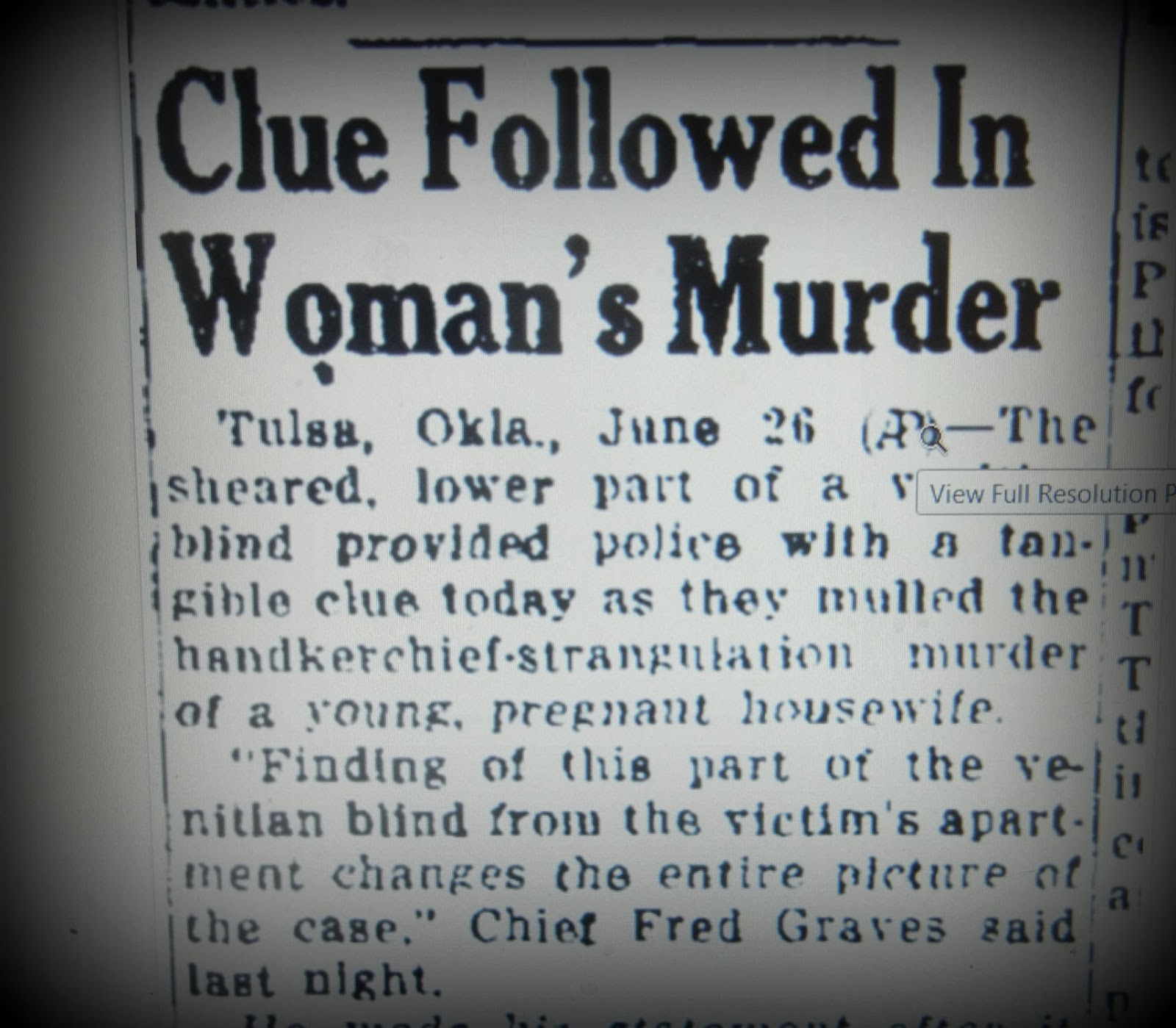 Two boys came forward and stated that the night Dorothy was murdered, they saw a man driving a car with California plates around the apartment building and the same vicinity where they later found her body.  Although the police questioned many suspects, including a four-time convicted rapist who had been in the area, all evidence was pointing to Monroe.

When Police Chief Fred Graves finally brought charges on him, they grilled Monroe for 11 hours. Eugene eventually admitted that he did kill Dorothy, and later on he added that he had help from a friend Odell McDaniel; some newspapers say his name was Eugene McDaniel. When he went in for arraignment, Monroe's public defender entered a not guilty plea, despite the fact the police had a written and signed statement from Monroe confessing to the murder. Monroe was faced with yet another murder trial, this time the odds didn't look good. 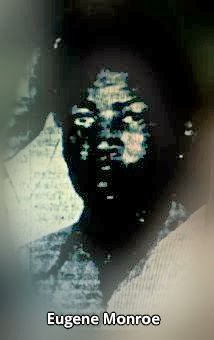 When it came time for his preliminary hearing, the prosecution had 13 witnesses, which included two African-American witnesses (Edgar Rouseau, a newspaper editor; and Jim Cooley, the Police Department Janitor) who testified that Monroe bragged to them about killing Dorothy. The defense had no witnesses to call.

There was an interesting twist thrown into the mix, when Defense Attorney Amos T. Hall questioned the Police Chief on the stand about Harold Beddoe, M.D., who had seen Monroe during his interrogation. Attorney Hall insinuated that he believed Monroe had been hypnotized into confessing. The Police Chief stated he knew nothing of the sort, and that he wasn't in the room during the time the doctor was seeing Monroe. Later the doctor testified on the condition of Dorothy's body from the murder. According to people in the courtroom when the Dr. Beddoe mentioned how Dorothy was murdered, Monroe "bent his head, covered his face with his left hand, wept, shoulders shaking heavily," and refused to look at Robert Waldrop's face when he testified.

The murder trial against Eugene Monroe began on January 21, 1952.  By April of that same year he had been convicted of the murder of Dorothy Waldrop and  sentenced to life in prison, after County Attorney Lewis Bicking joined defense counsel requested to spare Monroe from the electric chair. District Judge Eben L. Taylor imposed the life sentence for Monroe, sparing the death penalty. He was also given a 35-year sentence for armed robbery of a Oklahoma City Theater in a separate trial and conviction. 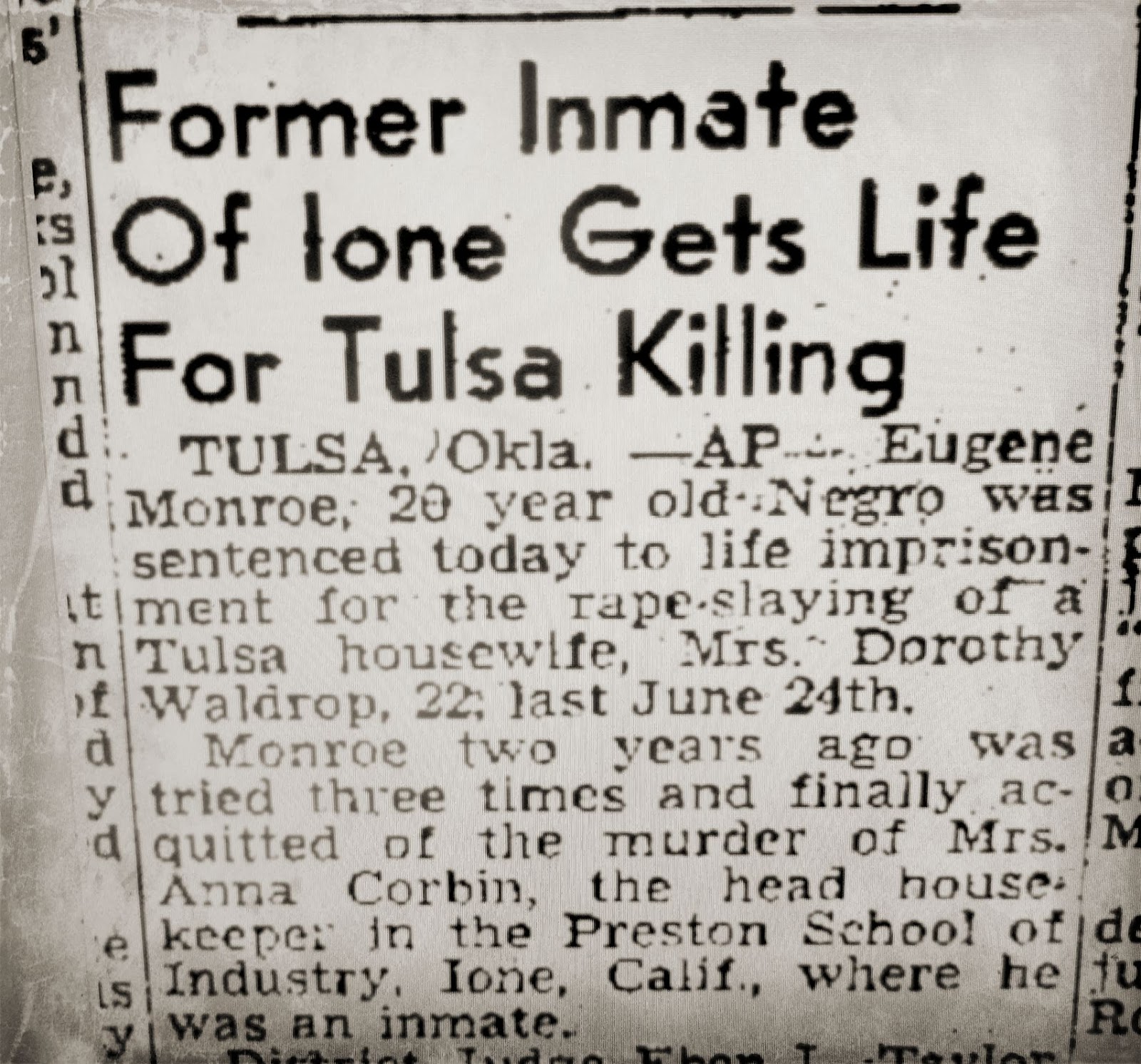 By 1976, Monroe had sought parole but was denied by the board although they had recommended reducing his sentence on his previous armed robbery conviction.  By April 25, 1981 Monroe was paroled and he returned to Los Angeles for the remainder of his life. He remained on inactive parole for many years until the Department of Corrections in Oklahoma assigned someone to look for him, being that he had been "missing" from their system. The officer assigned to track Monroe realized his age, being that he was born in 1931 and checked the Social Security Death Index. Sure enough, Eugene Monroe had died on October 3, 2007.  (To read more about Eugene Monroe's life and criminal background, please check out "Was Eugene Monroe a Serial Killer?")


In ending, with Monroe dead and gone we may never know the exact details of the murders of Vesta Sapenter, Anna Corbin or Dorothy Waldrop. In all three cases, only in Dorothy's case was Monroe actually convicted, leaving us to never have full closure for the first two murders. We must never forget those four innocent victims, if  also counting the unborn child, and I often wonder in the back of my mind if they were really the only victims? Could there have been others? It is a very sad thought that there could be more stories like this that we will never have the answers to.

Rest in peace Vesta, Anna and Dorothy (and her baby too).---

TO LEARN MORE ABOUT THESE STORIES, THEN READ- "Behind The Walls"