Never Made It To The Altar- Rose De Fabrizio

A girl’s wedding day is most often considered the biggest day of her life.  Most all girls imagine and plan how it will be on that special occasion, even at the earliest ages, imagining and dreaming of the day when she takes her vows to be someone’s wife. For us girls, we are a princess for that one day, our fairy tale. It is our special day, where all our dreams finally come true. Never in our wildest dreams, or nightmares, would we ever imagine that tragedy would strike on that perfect day.  Sadly, for one New York couple in 1946, their fairy tale didn’t come true.

Angela “Rose” De Fabrizio waited two years to be reunited with her childhood sweetheart, John Mastantuono, a Army Medical corps veteran. The couple had met back in high school and fell in love fast.  When Rose was 19 she and 18 year old John (or Johnny) had decided to marry. Unfortunately for them, Johnny was sent to war, crushing Rose’s dreams of wedding her beloved.

Despite the odds, Rose kept optimistic the two years that Johnny was away. Knowing that one day, he would come back to her and they would finally have their happy ending. When he finally returned from the service, Johnny made plans for them to wed in October of 1946.  Rose then quit her job, while Johnny took on the role of a working husband-to-be. With the help of his father, he purchased a home for his bride, furnishing the entire place to her liking. He bought her a ring and even borrowed a new car for the wedding day, in order for them to travel to Atlantic City to honeymoon.

On the day of the wedding, Johnny met Rose before leaving for the Church. They knew the old wives tale that it was bad luck to see each other before the wedding, but that didn’t seem to matter to them, they were so very much in love.  The last thing Rose said to Johnny before leaving to the Church was, “John, I love you with all my heart.”

At the Church, Johnny was in the rear of the building unaware of what tragedy was to come. Rose and her father were just outside the Our Lady of Good Counsel Church, and had just started taking the steps up to the entrance when Rose stepped on her train.

Just as her father bent down to fix the train that had been caught on her shoe, Rose collapsed to the ground. Her father grabbed her and held her in his arms, thinking she had only fainted. But as soon as he realized she was not breathing, a panic set in. Immediately people rushed to her side to aid her. Dr. Vivona, who was a guest of the wedding, rushed to her side along with a 12-men fire department rescue squad who arrived shortly thereafter. Unfortunately, they attempted to revive her, in vain. She had died immediately upon collapse. Johnny was devastated, along with Rose’s family and friends.


The newspapers fabricated a statement allegedly said by Rose's father, claiming he said: “The music started. The organ played ‘Here Comes the Bride.’ Six ushers and six bridesmaids were lined up along the aisle. I gave her my arm, my beautiful little girl. We marched. We had practiced good. We knew what to do, we took four steps, maybe, and she whispered, ‘wait.’  She pointed to the hem of her dress. She had stepped on it. I told her ‘I’ll fix it, don’t you bend down.’ Then it happened. ‘I’m dizzy,’ she said, and she fell. Mia Bambina, and somebody screamed.”

According to Rose's sister, Gloria Napolitano, the newspaper's statements were entirely false, and that her father never said those things quoted in the papers.  Gloria's son-in-law Bob Manning emailed me adding that Rose's father never spoke to Life Magazine either, and that the photos in the magazine were sold against the families wishes by the photographer. "The family attempted to sue the magazine until a lawyer suggested that he would be making money off of his daughters death", which is not what he wanted. Regrettably, her father dropped the suit.

The autopsy failed to disclose the actual cause of death, it took time before the press released that she had died of heart failure. One newspaper quoted Dr. Alexander Vivona who claimed that Rose had a rheumatic heart, while the deputy medical examiner of Nassau County, Dr. Allan Jaques said, “I found a general congestion, the upper respiratory passages. Before a cause of death can be ascribed it will be necessary to obtain a report of bacteriological and toxicological studies of the viscera.”

On October 10, 1946, Rose was buried at St. Mary’s Cemetery following her funeral at St. Joachim’s Church. Rose’s father could not bear to return to Our Lady of Good Counsel after the terrible memory of his daughter dying in his arms.

Rose was buried in her wedding gown and veil, along with the crushed bouquet of flowers she had fell upon during her collapse on her wedding day outside the Church. Heartbroken Johnny, bestowed his last and final gift to the love of his life, by ordering that a heart of orchids and 300 red roses be placed upon her white coffin.  Rose’s family stayed in front of her coffin alongside Johnny, grief stricken and weak during the service.

Hundreds of people attended the funeral earlier in the day, while many stood outside the Church in the rain. The motorcade of 35 automobiles, along with the hearse followed to the cemetery where nearly twice as many people came to see Rose interred into her final resting place. A large wreath of white carnations that were given by the ushers and the bridesmaids, lay atop the white coffin as a final act of respect to a lost friend.

Loss was not something new to Johnny, as he had just lost his parents and sister within that past year. On March 21, 1945, Johnny’s mother, Maria had died. The next day death took his grief-stricken sister, Antoinette. Finally, his father, Lewis, died April 20, 1946. Losing Rose left him completely alone and crushed. When asked what he was going to do with the house and furnishings he had bought his bride, his remarks were “I guess I’ll sell the furniture, I could never sleep in this room.” It was obvious that Johnny’s heart was broken, his spirit crushed and his hope for a better future was non-existent.  Rose was buried near Johnny’s parents’ and sister’s grave, a chilling reminder to him that he was now in fact, alone.


Such a sad and terrible tragedy, one of which that should have ended like a happy ending in a fairy tale, but one that proved to end like a Shakespearean drama. Let us never forget Rose Fabrizio and the love she shared with Johnny Mastantuono. Let us never take love for granted, for we never know what tomorrow brings. Love like there is no tomorrow…because for some of us, there won’t be one. 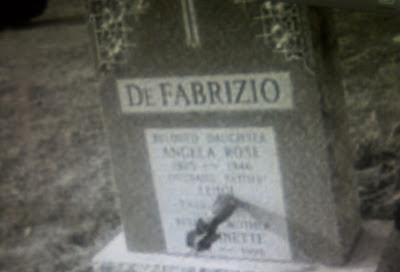 TO READ MORE ABOUT ROSE'S STORY AS WELL AS OTHER MYSTERIOUS AND BIZARRE TALES, PURCHASE YOUR COPY TODAY OF:"Stories of the Forgotten: Infamous, Famous & Unremembered." Available on Amazon!


THANK YOU TO LOU MASTANTUONO (John's son) FOR CONTACTING ME AND SENDING ME THE PHOTO OF ROSE'S GRAVE.

THANK YOU TO BOB MANNING and GLORIA NAPOLITANO FOR SHARING ADDED DETAILS AND CLEARING UP MISINFORMATION ABOUT ROSE'S STORY.